Google honors keno in 25 countries with black and white honors

July 17 marks the 90th anniversary of his birth One of the most famous Argentine artists around the world, Joaquín Salvador Lavado Tjón, better known as Quino the creator of Mafalda, She is also the irreverent and spontaneous popular girl who does not like soup and wants to change the world.

And Google decided to honor him, displaying a doodle or black and white image of An artist best known for his use of social satire to depict situations in everyday life.

Although Quino was born in Argentina, the celebration given to him by Google will not only be visible in this country but from 25 other countries it will be possible to interact with the tribute given to the foundations of animation.

Similarly, Florencia Sabatini, Director of Communications at Google Latin America, emphasized, “This is our tribute to a great Argentine artist and his immense legacy. A man of unparalleled talent, who gave life to characters we will never forget, and who have remained untouched over the years.” Keno’s 90th birthday is a date that touches the soul of those who were born and raised in Argentina, but also of the thousands of people who have been captivated by Mafalda’s stories in other parts of the world.”

Similarly, the director stated that with his doodle created by a budding artist, Quino seeks to be remembered with great pride, which has distinguished many generations and will also become known among the youngest on July 17.

Giulietta Colombo, the artist’s niece, also has a few words to say, “I’m celebrating this Google tribute to Quino and his work, both Mafalda and his comic strip pages, to which my uncle has dedicated 60 years of his life.”

The heiress of the cartoonist also mentioned that the authenticity of her uncle’s work is indisputable because of the topics he dealt with throughout his career years, and that his legacy is now and the task of all who remember him fondly is to maintain the interest of readers, especially of the new generations.

That’s why Google subscribed to this important date, because with this mentioned in its search engine, Children and teens will wonder about the author and discover his career and his great influence on Latin American artistic expressions.

His most complete form of expression was painting, which is why I wanted to portray him creating the unforgettable world we know. I studied his self-portraits and was inspired to see how he portrays himselfdrawing intensely on his desk full of sheets, pencils and his lamp.” Said Azul Portillo, who also played an important role in this celebration, being the one who made the doodles.

The artist was invited to give this homage, and she continued, “From the beginning I imagined this black and white doodle, it seemed to me a characteristic that quickly evokes Quino strips, and on the other hand, I feel that I can reflect my imprint as an artist, because austerity in color is one of my favorite resources when illustrating “.

sure, Quino was one of the most influential people in the Spanish-speaking worldThis can be calculated by Google, since Searches related to him were very frequent In Argentina, Uruguay, Guatemala, Dominican Republic, Bolivia, Peru, Spain, Costa Rica, Chile and Colombia.

Similarly, during the past five years The keyword “Mafalda” has been widely consulted In Argentina, Uruguay, Italy, Colombia, Spain, Portugal, Costa Rica, Ecuador, Peru and Chile. 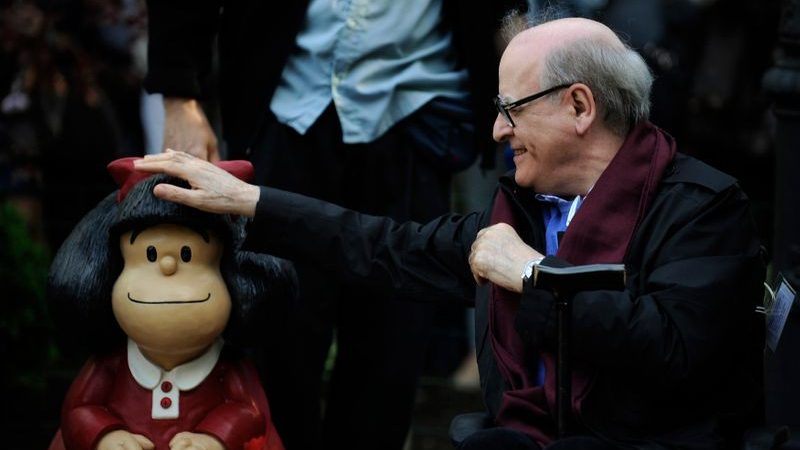 The audiovisual content platform has become a place widely used by users to learn, which is why it exists These videos tell unpublished details about Quino.

1. Searching for Kino (documentary film of the year 2020), on the channel of the International Festival of Social Innovation (fiiS).

2. Quino: 10 Things You Might Not Know About Mafalda + Top 5 Jokes | Sorry, pods. It is available on Pablo Molinari’s channel

3. Kino: How was Mafalda born? From Educatin . channel

4. Quino: Creator of MAFALDA by Draw My Life in Spanish

5. Curiosity about Kino and Mafalda. Available on AnimalMX.