So you can see where the game is broadcast

There are streaming platforms for everything and also tools that serve you, an example JustWatch that lets you know where the game is being broadcasted What would you like to see. The truth is that in this sea of ​​applications available to view all kinds of content, especially sports content, you can easily get lost if you don’t have a guide at hand.

The solution, at least for sports, can be in the hands JustWatch Sports, a platform that already has about 25 million users In 15 different countries, including Spain and the United Kingdom.

FIFA+ is the future of ‘Netflix Football’, and it already offers thousands of free games

Until now, this platform has had the ability to tell you where you can watch any movie, series or documentaryon various streaming platforms, or simply where you can buy it.

The tool has grown and now Among its possibilities is the possibility of having a sports department at handHence “sport” and gives you references for every football, basketball or Formula 1 race on the planet.

How does JustWatch work

JustWatch shows you everything you need to know about the movies, series, programs and applications they are available in, The catalog of major streaming platforms such as Netflix, HBO Max, Disney +, Apple TV or Prime Video; Although there is more on the list.

It also gives you Information about the most popular online video stores, such as Filmin, iTunes or Google Play Movies. But, this was no longer the only information the platform was interested in.

See also  What is Season 5 of "Bell Call Saul" on Netflix?

Now you can access all sports from Spain, UK, Germany, Italy and France; However, you should know that at the moment JustWatch Sports can only be used on its website, since it is still in the beta phase, which does not matter much when it comes to learning more about the matches.

How to use JustWatch Sports

If you are already a JustWatch user, then the Sports version will not seem strange to you. It is the same section as series and movies, as well as intuitive and will allow you to consult matches and races, with their schedules and transmission platforms at a simple glance.

You will be able to see if it is being broadcast by Movistar Plus + or DAZN, for example, if you are in Spain; Also Prime Video and Sky if you are elsewhere.

Because it’s still a beta test for JustWatch Sports Not many sports are includedbut its developers assure they can grow sooner.

Until now, You will have access to all the data of the Formula 1 Grand Prix, the matches of the Spanish League, the German League and the English Premier LeagueSerie A and Ligue 1 will give clues to the Women’s European Cup and UEFA Conference League. 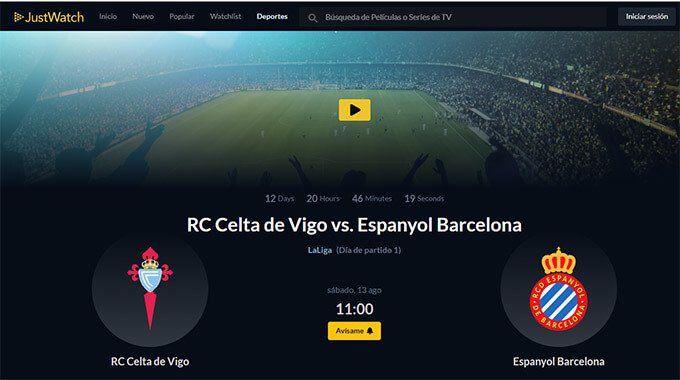 One thing you’ll be glad to know is that JustWatch Sports is freeSimply create an account to be able to customize notifications and alerts and improve your favorites list. You also have the possibility to enter anonymously and it will work for you simply by entering your country and the streaming platforms you are using, so it will give you the information, only you will be lost at the end of the visit.

Whichever way you decide to enter, You will have access to all the match information available at the moment As well as what is about to broadcast in the near future. Upon entering you will find a button that says “Watch Now” We are sorry to tell you that it will not take you to the match, but rather redirect you to a service that broadcasts the match.

If you decide to enter With a user, you can get notifications that reach you before every match After that, you will be able to use other functions that are about to be combined, such as tracking tournaments, teams, and even specific players.

At JustWatch Sports they have also added a tool that allows you to improve your searches since then You can add filters to find something specificallyFor example, you will be able to choose which matches will be broadcast live on DAZN.

So far It is not known how long it will take to access the mobile version of JustWatch Sportsbut may be available once all features have been activated and passed the testing phase to correct any errors that may occur.

DAZN renews its plans: these are the three new subscriptions from € 12.99 per month

Prev post The College of Medicine is working on clinical simulation
Next post Nicaragua, the center of brotherhood, brotherhood and culture

Ranking of the most watched Disney + series in Peru

Netflix: The drama that will make you breathless and is the 3rd most watched movie